How to Stop Numbing Your Emotions by Binge Eating

When It Seems Safe to Feel, You Won’t Need to Eat Uncontrollably Any More!

Like any addiction, the main underlying cause of binge eating is limiting beliefs and emotions—both conscious and unconscious—around not feeling safe or secure. While some of those may have been imagined in childhood, many were probably very real. In my experience, it only takes one traumatic incident for a child to develop major sabotaging beliefs and emotions that can cause huge challenges throughout his or her life. 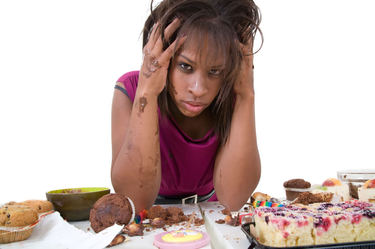 You may be aware that our belief system influences our thoughts; our thinking leads to emotional reactions that then prompt our behavior, which finally determines our results. It’s a chain of events that begins with the core beliefs that we hold at a deep level inside.

To understand how beliefs work, think of them as a light switch—each one is either “On” or “Off.” The most sabotaging combination is when the switch is “Off” for empowering beliefs and “On” for limiting beliefs. This is a double block to success, whether you want to overcome an eating disorder or create something positive in any area of your life. My goal for clients is to flip these to the opposite direction: “Off” for sabotaging beliefs and “On” for empowering beliefs.

To give a personal example, I discovered that beneath my 22-year binge eating disorder was the belief that it was not safe to feel my own anger. As a toddler, I once had a tantrum because my mother wouldn’t pick me up when I wanted attention. Instead, not being the nurturing kind, my mother spanked me and threatened that if I didn’t stop crying, she would give me something to cry about. This was a common mantra of my generation during the early ‘50s.

Unfortunately, my failed tantrum experience affected my belief system in a huge, negative way. Due to my mother’s rejection of me, which was traumatic as a 3-year-old, I made up the belief that it wasn’t safe to feel angry or express my anger, and that I needed to be nice to get my needs met. Thus, I became an inauthentic people-pleaser with minimal boundaries, which caused a lot of suffering in my life.

At 16, my unconscious angry feelings wanted to surface, which made me anxious. To numb out my anxiety, I did the only thing I knew to do—binge on ice cream and crunchy, sweet cookies and cereal. Much later, I learned that it’s the addictiveness of sugar that makes it an ideal numbing agent, which added fuel to my problems.

Being out of control with food was demoralizing, shameful and embarrassing. The yo-yo dieting cycle only worsened my situation. I felt hopeless and guilty. What’s more, I didn’t even know how to eat in a healthy way then, so I always felt hungry and deprived when I wasn’t binge eating.

Eventually, I attended a weekly class where I learned how to feel my anger for the first time. It wasn’t easy, so I repeated the three-month class for more than a year. After 14 months, I no longer needed my old coping mechanism of binge eating. I was able to develop a normal relationship with food, eating and my body, naturally and gracefully losing the extra 25 pounds that had frustrated me for so long. Finally, I experienced a great deal of freedom, empowerment and gratitude, which launched my commitment to personal development 32 years ago.

Today, when I work with a coaching client who has an eating disorder, I use a method called muscle testing to check whether or not they feel safe and secure:

Most clients with eating or food challenges are “off” for those beliefs, so our work begins there.

Statistically, more than 30% of all women have a background of sexual abuse, which makes it easy to understand why so many of us don’t feel safe and secure being attractive on an unconscious level. This can cause all sorts of issues, because being and feeling safe is the most important foundational principle a person must have to overcome their food challenges.

In my research, I have discovered that most children in the world are not raised to express their feelings authentically, but instead to ignore and suppress them. Unfortunately, feelings buried alive can be triggered at any time, which leads to reactive, uncontrollable behavior (such as binge eating), according to Karol Truman’s ground-breaking 1991 book, “Feelings Buried Alive Never Die…”

Although some experts think that people with an eating disorder have a mental illness, I don’t necessarily agree. I know that when I was finally able to be and feel0 safe feeling my anger, my anxiety disappeared, allowing me to enjoy a good relationship with food and eating. Beyond that, the process of being present to my feelings and being safe greatly enhanced other areas of my life as well.

And remember: it’s healthy to be aware of your feelings and feel them fully!